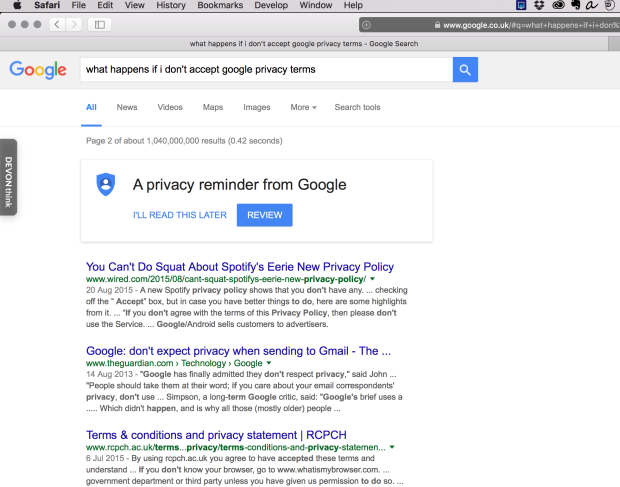 Kind of funny, the privacy reminder. I’m guessing most people don’t see this because most people are logged in to Google most of the time and so have accepted their terms explicitly when they log in. But I’m not. As you can see I did a bit of investigating, and about a week later the message changed…

I’m actually banned from using Google unless I accept their terms. I still don’t fancy this so it has given me an incentive to try out other search providers and – guess what – I get along fine. Great.

But it’s a bit more annoying than that because sometimes other people use Google to host things (YouTube videos, maps, documents etc) and so I’m not really using Google when I want to look at those things, Google just happens to be hosting. The price for me to watch the video, view the document, see the map is to make an agreement with Google to collect information about me. A quick look at their privacy policy confirms this is quite a long list of things they want permission to collect.

So… I can work around that if I try – “incognito” browser window (I get the “privacy reminder” message, still, but I’m not blocked), different computer, etc. But it’s annoying.

But look at this:

Really strange. My browser can’t connect to Google sites at all. Now perhaps this was some weird technical thing – but the internet was working fine for other sites (you can see that the second one is a YouTube video embedded in a Bing search result) and I didn’t get the same error in other browsers.

So I can’t help wondering if Google’s servers are now refusing to talk to me at all. Sent my computer to Coventry. Pretending not to be there.

Whether or not that’s what happened it makes me think about the whole issue of permission, Google’s insistence that users must explcitly agree to give them data as a condition of being able to use their service brings the whole issue of “free” into clear sight.

Google isn’t free. They require quite a lot in return for being able to use their services. A quick summary from their privacy policy:

And so on. Lots of stuff you have to give them before they’ll let you use their service. And they use it for a pretty broad range of things, also explained (although not, in my view, very clearly) in their privacy policy.

None of this is a criticism of Google. I think this is rather great, actually. I like that the deal is being made clear – at least to people who aren’t logged into Google, and that they can make their own choice about whether to click the “accept” button.

But it does highlight the issue. Permission matters – and not just in copyright.

It highlights another issue too which I alluded to above. It’s all very well asking me to opt in as a condition of using Google’s services, and all very well for me to decide not to and live without them if I want.

But what about when I’m NOT using Google’s services? I’m using someone else’s and it just so happens that THEY have decided to use Google to help?

Look at this email I got today from a company called Brewbot who make a cool device I will probably never own which brews beer for lazy people like me. 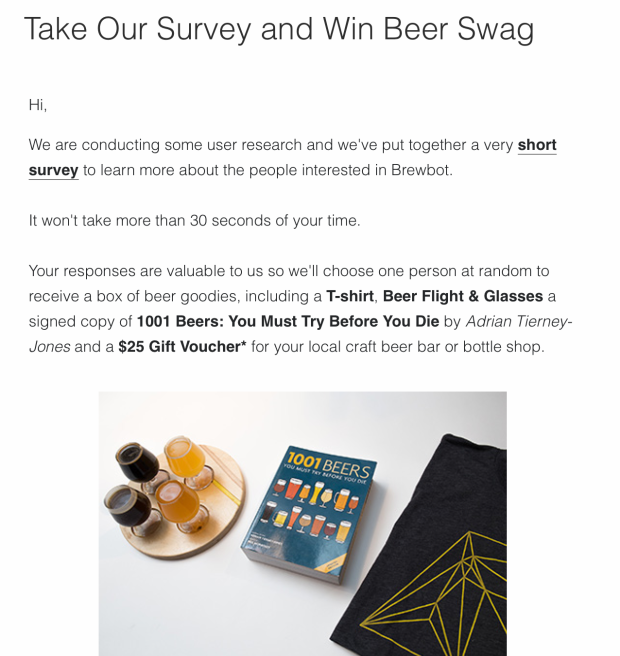 I’m a sucker for a chance to win some swag, so I clicked the link to their survey and this is what I got…

It’s a Google doc and it doesn’t work for me. It does if I use another browser, or an incognito window, but in my normal browser I get this inability to connect to Google. Whether or not this is related to the privacy policy issue I don’t know but there does seem to be a pattern here.

So Brewbot, it turns out, seem to have been unwittingly recruited as a data gatherer for Google. Before I can offer my survey results to Brewbot I have to agree to silently give Google the long list of stuff I described above.

Or, to look at it another way, companies using Google to host their surveys, documents, videos, whatever, are actually only able to offer those things to opted-in Google users. Not to everyone. As long as Google remains ubiquitous perhaps the distinction isn’t obvious, but who is aware of it?

This seems dysfunctional to me, and unfair. It seems a high price to pay, for users and for companies who are using Google’s services (and may well be paying for them) for reasons that are nothing to do with Google’s core consumer services.

At its heart it highlights the conundrum which is central to so many of the issues which copyright people – as well as the internet at large – need to sort out. This silent, unknowing, pervasive process which takes the place of permission and transparency is not, in the end, serving the broad interests of the users of the internet.

I’m unusual in not having accepted Google’s terms, which means I am also unusual in seeing these messages which make what’s going on slightly more explicit to me.

But isn’t this an interesting perspective from which to consider the question of price and value on the internet. While money often doesn’t change hands, rendering lots of internet services nominally “free”, lots of other valuable stuff is still given in return – and if it’s not, the service is withdrawn.

At the heart of it all, value is being exchanged for permission. The same thing that happens in the copyright world. It needs to be done better.